My Metagraph NFT project is based on a series of abstract digital drawings created 20 years ago, reborn on the blockchain as a collection of 1/1 audiovisual NFTs.  You can view all of the works minted thus far here.

There will be a total of 23 Metagraph Animation NFT’s, each of which is a 23-second loop containing animation and original audio.  These works are based on my Metagraph series of abstract digital drawings created in New York’s East Village and Southampton New York between 1999 and 2004.  The pieces were drawn on a PowerMac 8600 in Adobe Illustrator on a Wacom tablet. The number 23 is personally significant as it a birthdate I share with my daughter Aya.  The first Metagraph Animation NFT, Urbanite, was minted on March 30, 2021, and sold that afternoon.  The original drawing was created in 1999.

The first five Metagraph NFTs (early mints) were minted in 2021 prior to the introduction of collections on Foundation.  These works include Mesmertron, which was exhibited in NFT Now, an early online exhibition of NFT art curated by Anne Spalter. Mesmertron is the first work of mine sold on the secondary market.  All of the early mints are sold, with the exception of Memesis, which resides in the  Techspressionism permanent collection.

The remaining 18 works will reside within my Metagraph collection on Foundation. New works are minted on the 23rd day of each month.

I coined the term “Techspressionism” as the title for a solo exhibition in Southampton NY in 2011. It was first described as a movement in the 2014 WIRED article “If Picasso had a Macbook Pro” and later elaborated upon in a 2015 interview on the PBS show Art Loft. The working definition of Techspressionism is “An artistic approach in which technology is utilized as a means to express emotional experience.”

Over the course of the pandemic, Techspressionism has grown into a social sculpture of over 300 artists working with technology from 40 countries.  Since the Summer of 2020, there have been over 45K posts published on Instagram using the hashtag #techspressionism.

Techspressionism distinguishes expressive fine art results from such genres as “digital art,” which can include animated movies, and video games, as well as  from “new media” works that do not embody convincing artistic intent.

The subjective lens of the individual artist (rather than the product of a corporate studio) is what connects Techspressionism to its predecessor, Expressionism. Expressionists presented the world from a subjective perspective, distorting it radically in order to evoke moods or ideas, seeking to express their emotional experience rather than physical reality.

I recently curated the exhibition “Techspressionism: Digital and Beyond”, at Southampton Arts Center in Southampton New York. The exhibition ran from  April 21-June 4, 2022, and included the works of over 90 artists working with technology from more than 20 countries.

Kneeling Icon was included in this exhibition as large-scale digital monoprint accompanied by an AR-triggered NFT minted on Foundation.  The NFT adds an AR (augmented-reality) component to the artwork and establishes provenance in the public ledger. When the physical work is viewed through the free Artivive AR app on a mobile device, it transforms into the animated NFT on the gallery wall.

Kneeling Icon will be exhibited in NYC in Fall 2022 as part of Art Now, a group exhibition at the Hearst Building curated by art consultant Betty Levin. 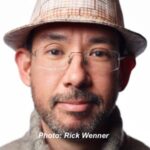 I was born in the Bronx, New York in 1971 to parents of Japanese and Jewish ancestry, both Ph.D chemists. My grandmother Kimiye was an accomplished practitioner and instructor of Japanese Shodo calligraphy in Hawaii and Japan. In the 1990’s I supported my studio practice as a freelancer in NYC advertising agencies, coding and designing some of the web’s first consumer-facing sites for brands such as Snapple, GOLF Magazine, and Popular Science.

My artworks reside in private and public collections including the permanent collections of the Pollock-Krasner House and Study Center, Stony Brook University Hospital and the Islip Art Museum, as well as the AOI (Art on Internet) Foundation, and Anne and Michael Spalter Digital Art Collection, one of the world’s largest private collections of early digital art. I am honored to be a recipient of grants from the Pollock-Krasner Foundation and the New York State Council on the Arts.

Physical artworks, including paintings, works on paper, and mixed media works are available for viewing at goldberg.art.  For notifications of new NFT drops, follow me on Foundation.